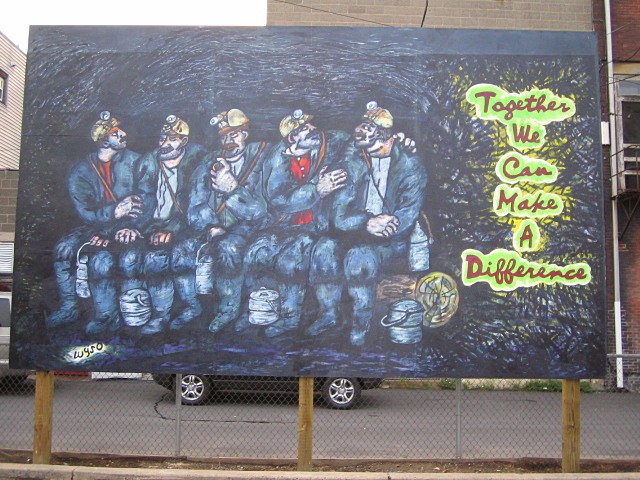 During the spring and summer of 2006, Keep Pennsylvania Beautiful (KPB), the Pennsylvania Downtown Center (PDC), and the Pennsylvania Horticultural Society (PHS) partnered on an innovative demonstration project to beautify Pennsylvania neighborhoods and encourage individual stewardship by using the skills and enthusiasm of college interns.  The project is based on the theory of Dr. Doug McKenzie Mohr in his book, Fostering Sustainable Behavior through Community Based Social Marketing. Dr. Mohr’s research indicates that a grassroots component is an essential part of any campaign to change the social behaviors of individuals.

KPB, PDC and PHS share a core belief that neighborhood art and gardening projects are an effective approach to enhance communication and cooperation among neighbors, due to three very simple facts: first, the activities are inherently fun; second the topics are non-threatening and not controversial; and third, the results are highly visible and aesthetically pleasing.

The partners also shared a mutual interest in answering the question: can the basic academic skill and abundant enthusiasm of college students effectively and efficiently be used as a grassroots catalyst to engage and energize citizens in improving and caring for their neighborhoods?   In an effort to answer this question, KPB, PDC, and PHS jointly undertook this demonstration project in seven Elm Street Communities and one additional neighborhood in York.

From January through April, 2006, KPB recruited college students from schools across the east coast, specifically reaching out to students studying the fields of Landscape Architecture, Horticulture, the Fine Arts, and Urban Planning.  By May, a total of sixteen interns were selected and assigned in teams of one, two or three, depending on each community’s needs.  At the end of May, PHS organized and conducted a five-day initial training that provided the interns with an overview of the project and their role in it.  The initial training included advice on how to work within a community and be a good “cultural traveler” and specific project assistance.  At the end of June, KPB and PHS jointly organized a mid-project meeting where the interns gathered to discuss their projects, share experiences, and offer advice with particular issues or concerns.  On August 2, 2006, KPB and all the project partners attended a final project review and wrap-up meeting where each intern team presented the results of their project, their impression of its success, and ideas on how to improve in future efforts.

Throughout the summer, the interns worked with residents in designing and creating gardens, murals, and mosaics as a method of building civic pride and responsibility.   These energetic students used their academic skills to work with residents to develop a ‘vision’ for their community and accomplish at least one ‘concrete’ task.   For example: In York, the interns and community partners transformed Salem Square’s central green space into a community gathering space. In Allison Hill, Harrisburg, the project partners designed, painted and installed a community mural, while the project in Kennett Square reduced storm water runoff through the use of functional landscapes.

This summer, the community of Mount Carmel, Mount Carmel Area High School students, and college interns from Kings College and Lehigh University all had a unique opportunity to provide the community with one of the first concretely visible downtown revitalization projects.  They have constructed a mural along the major thoroughfare into town. The two college interns, Sara Tomedi and Danielle Palencar, and two Mount Carmel High School interns, Phylicia Cimino and Ron McClay,  reproduced a work of art from the collection of Frank “Wyso” Wysochansky.

The Wyso artwork was selected following an art exhibit held in the area in January of 2007.  The curator of the artwork from Lehigh University/Wyso Charitable Trust, KPB and DEP Project COALS met in the early part of the year and partnered on this project along with the Borough of Mount Carmel as the Pennsylvania Core Community.

The Wyso Mural is on a 12 x 20 foot screen located at the intersection of Pear Street and Third Streets on the Wachovia Bank parking lot.  This is the site of the old Victoria Theater and will therefore commemorate a bit of Mount Carmel’s history as well as local heritage in the selection of the subject matter of the mural.

The mural has been completed and an unveiling date is scheduled for Friday, August 10, 2007 at 10:30 AM.   Thanks to the generous donations of Mt. Carmel businesses, fire companies, and friends, a picnic lunch will be provided.   The unveiling ceremony is sponsored by Mount Carmel Borough and Steering Committee for Mt. Carmel Main Street Program.  Interns thru Keep PA Beautiful College Internship program.

The Mount Carmel project is one of 13 such KPB college internship programs across the Commonwealth.  The summer internship projects will have a tremendous benefit to the community, the environment, and economic prosperity in the area.

More specifically, the Wyso Mount Carmel project is one small component of a much larger downtown revitalization effort.  The Borough of Mount Carmel, Project PRIDE, DEP Project COALS, KPB, and the PDC (through the Main Street and Elm Street programs), along with other groups and organizations are all making major strides and implementing economic development and downtown revitalization projects in the Lower Anthracite Region.

Additionally, DCNR has approved the Lower Anthracite Regional Heritage Trail, which is a 35 mile stretch running from the Frackville/Ashland area through Mount Carmel to the Susquehanna River, thereby connecting the Schuylkill Trail and the Susquehanna River Trail stretching through the center of the state.

The Wyso Mural will be a stepping-stone for improving the community and the Anthracite Region.

The overall goal of the KPB college internship program is to have college interns working within the community and engaging the residents while working on these projects.  The theme chosen by the students and that is offset on the mural itself is “TOGETHER WE CAN MAKE A DIFFERENCE.”

The college interns have worked with the Borough of Mount Carmel, Mount Carmel School District, Winnie-the-Pooh Daycare, the Mount Carmel Nursing and Rehab Center and other community volunteers and businesses.  Also, community businesses and individual residents from the community have also made either monetary donations or donations of time and materials towards the project.